To achieve reconciliation you should have enough strength, a reference system and leadership skills – Tony Blair 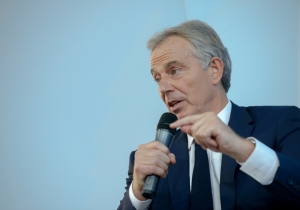 The three things are requisite for reconciliation – to have enough strength, a reference system to move forward and leadership skills, stated Tony Blair, Prime Minister of the UK (1997 – 2007), during the working lunch “Towards Reconciliation” at 11th Annual Meeting of Yalta European Strategy (YES) on Saturday in Kyiv.

Blair reminded while he headed the government he “worked on the reconciliation” in the Northern Ireland, and then in the Middle East. “There are three fundamental lessons I’ve learnt”, - he emphasized, adding that nevertheless every situation differs.
“You need enough strength to achieve the balance of power, second, some reference system should be in place wherefrom to move forward, third, you should be ready to realize leadership, to lead the way”, – specified the founder of Tony Blair Faith Foundation.
Blair added that the leaders engaged in reconciliation processes were usually criticized, so they should be ready to that. “Reconciliation is among the most difficult leadership processes. Indeed, it is the easiest thing to gather people who agree with you, to make a passionate speech and get a battery of applause, and it is the most difficult thing being a leader to speak to the contrary, to say “No”. You can tell people: “I know you want me to go this way, but I would like to achieve reconciliation. This is where leaders perform an act of leadership”, - noted the ex-Prime Minister of the UK.

Franco Frattini
President of SIOI; Special Representative of the OSCE Chairperson-in-Office for the Transdniestrian Settlement Process; Minister of Foreign Affairs of Italy (2008-2011), 15th YES Annual Meeting, 2018
«We extremely need political leadership if you want to see the European Union more proactive on a global scene.»