The best guarantee for Ukraine’s security is a successful implementation of the Association Agreement with the EU, - Pavlo Klimkin 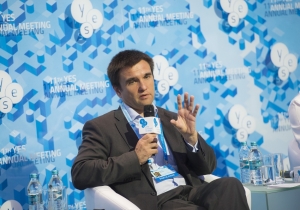 One of the best possibilities to guarantee Ukraine’s security is a successful implementation of the Association Agreement between Ukraine and the European Union, even though Russia sees such an agreement as an intrusion into the RF sphere of interests. This is the opinion shared by Foreign Minister Pavlo Klimkin during the panel “Association Agreement With the EU and Strong Relations With Russia – Difficult? Or Impossible?” at the 11th Annual Meeting of the Yalta European Strategy (YES) on Saturday in Kyiv.

“The idea of the Association Agreement (between Ukraine and the EU) is perceived by Russia as an intrusion into the sphere of its interests. One of the best possibilities to guarantee Ukraine’s security is a successful implementation of the Association Agreement”, pointed out the Minister.
Klimkin emphasized that economically, Ukraine’s cooperation with the European Union does not impede cooperation with Russia. “Economically speaking, it is not a problem at all”, he pointed out.
Igor Yurgens, Chairman of the Institute for Contemporary Development who also took part in the discussion, is confident that the EU and the Customs Union should deepen their economic cooperation. “I think, stakes should be raised in this game. It seems to me that the only way to make sure there are no more dividing lines for us is to start negotiations on free trading between the EU and the Customs Union”.

Carl Bildt
Minister for Foreign Affairs of Sweden (2006-2014); Prime Minister of Sweden (1991-1994), 15th YES Annual Meeting, 2018
«If you look at opinion polls throughout Europe, there has been a significant rise of public opinion support for the European Union. The reason for that is what I call PTB effect. The PTB is Putin, Trump and Brexit.»