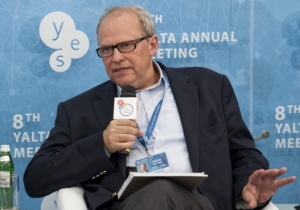 Ukraine, which current economic growth is equal to 4%, may double the growth rate and reach Turkey, which demonstrates 9% growth today. This statement was made by Anders Aslund, Senior Fellow of Peterson Institute for International Economics, one of the leading world’s experts in Ukrainian economy, in the discussion on prospects of Turkey and Ukraine development. “Ukraine possesses high economic potential which is underused,” he said.

The key event which would help to increase the pace of Ukraine’s economic growth, in Aslund’s opinion, will be an expected deep and comprehensive free trade agreement between Ukraine and the European Union. Turkey’s story proves that. “Turkey’s economic growth started when it entered into a trade and economic union with the EU in 1996. So, it is very important for Ukraine to get a free trade agreement with the European Union. This matter Europe and Ukraine are to address nowadays.”

However, the trade, according to Anders Aslund, is only one driver of growth. The other, not less important factor is education. “Higher education in Ukraine is very weak. Its level in Turkey is far higher. Ukraine needs modern level universities and good program of grants for studies abroad. If this does not happen, Ukraine would not be able to use its potential in full.

Finally, the third factor, which would facilitate economic growth in Ukraine – improving the quality of public governance. “Most countries developed very fast in those periods when they improved public management of the country. Turkey is 56 by corruption index, Ukraine is 134 out of 178 world countries. This means that deregulation is required. The entire public administration system should be purged. Turkey has made huge steps in this direction,” Anders Aslund said.

Aslund pins his major hopes concerning economic growth in Ukraine on agriculture. “Now this is the fastest growing economic sector. I don’t see any reasons why Ukraine can’t succeed in agriculture,” he said.

Victor Pinchuk
4th YES Annual Meeting, 2007
«If EU is to extend, it could not ignore Ukraine»