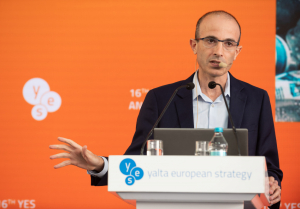 Ukraine is on the frontline of the fight for freedom against internal dictatorship and external imperialism, and the future of liberal democracy in the world depends on its success, Professor Yuval Harari, of the Hebrew University of Jerusalem, said at the 16th Yalta European Strategy (YES) Annual Meeting "Happiness Now. New Approaches for a World in Crisis" organised by the Victor Pinchuk Foundation.

"In fact, the eyes of the whole world are turned towards Ukraine. The thing is, the idea of liberal democracy, which seemed invincible for the last 10-20 years and was considered to be the future, has been losing its appeal over the last four years. People are losing faith and this is a threat to the future. Ukraine is a ray of light where people still have this faith in freedom, in openness, in these values. Therefore people are watching to see if Ukraine can pull it off," he said.

Harari added that Ukraine's success would inspire people in many other countries, including Russia.

"If Ukraine succeeds, this will significantly change the situation in Russia. Because Russian society will wonder: 'If they could do it, why could we not?' And, indeed, this makes the situation in Ukraine even more complicated because Ukraine's neighbour has a very strong regime that has a real interest in its failure," he added.

In Harari's opinion, Ukrainians need to understand their history well but, despite the great number of tragic pages, they also need to remember that the past does not dictate the future. "The past does not determine the future. We should not be slaves to our history, we should write a new page," he concluded.