Rule of law and fight against corruption are the prerequisites to draw investments to Ukraine, – Dmytro Shymkiv 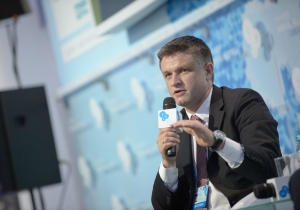 Rule of law and fight against corruption, judiciary and police reform are the necessary prerequisites to draw investments to Ukraine. This was the opinion shared by Deputy Head of the Presidential Administration on administrative, social and economic reform Dmytro Shymkiv during the panel “Ukraine’s Economy and Institutions: Reform Now - or Collapse” at the 11th Annual Meeting of the Yalta European Strategy (YES) on Saturday in Kyiv.

“I want Ukraine to be known via its economy, via its people and thanks to its opportunities and capabilities. The precondition for the economy is the rule of law, fight against corruption, judiciary reform and police reform – there will be no investment otherwise”, he pointed out. Shymkiv emphasized that drawing investment to Ukraine is possible even in a situation of war. “We have so many regions, there are investments that are eager to come to the Lviv region “, said the Deputy Head of the Presidential Administration.
Valdis Dombrovskis, Member of the European Parliament (European People’s Party Group), Latvian Prime Minister (2009-2014) who was also participating in the panel gave some advice to Ukraine: in the near days, arrangements with Russia on gas should be reached, during the next couple of months, the budgetary issues should be solved (including the issues of income, deficit, subsidies), and the task for six months to one year is to implement anti-corruption reforms top-down.