The European union will not allow the RF to dictate to the EU conditions as for relations with Ukraine , - Commissioner Stefan Fule 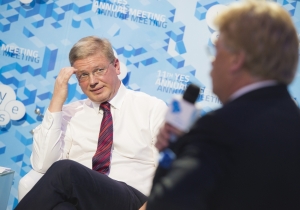 The European Union will not allow Russia to dictate conditions as for the EU’s relations with Ukraine, said Stefan Fule, Commissioner for Enlargement and European Neighbourhood Policy during the panel “Association Agreement With the Eu and Strong Relations With Russia – Difficult? Or Impossible?” at the 11th Annual Meeting of the Yalta European Strategy (YES) on Saturday in Kyiv.

“Russia will not be dictating us any ultimatums or conditions. The Association Agreement in the wording that it was signed will now be ratified, and ultimately implemented. And this is wonderful”, said the European Commissioner.
Head of the European Parliament’s Committee on Foreign Affairs Elmar Brok, who also took part in the discussion, said that “not a coma will be changed” in the agreement.
Additionally, Brok said that Europe wants to have good relations with Russia, it is interested in good relations between Ukraine and Russia, but Russia has to respect the international law.
Fule explained the EU’s introduction of new sanctions against Russia: this is not an intention to punish it for its position regarding the Association Agreement, but a punishment for the annexation of Crimea and the conflict in Donetsk and Luhansk regions. “We want to be clear that we will not be watching indifferently the violation of the international law in the way as we saw it in Crimea. Now, Russians, with their involvement, are adding to the escalation in the East of Ukraine. This is the role of the sanctions”, stressed the Commissioner.

The 11th Yalta European Strategy (YES) Annual Meeting will be streamed live at yes-ukraine.org in English and Ukrainian.