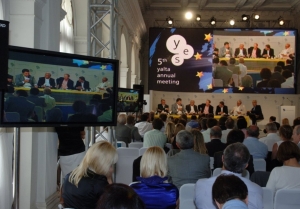 At the same time, representatives of Ukrainian state power and business community consider the preparation of the Area's format should be more thorough in order to minimize the risks for Ukrainian economy in relation to FTA building.

These are the results of "The future Free Trade Area between EU and Ukraine" discussion, held within the 5th annual Yalta European Strategy (YES) summit.

"The Free Trade Area gives a deeper economic integration between EU and Ukraine; it gives more freedom in terms of capital turnover and people's movement. It may also create conditions for eventual accession of to the EU or becoming such a candidate", mentioned Peter Balas, Deputy Director General of DG Trade within European Commission, also adding that building the FTA with the EU may in no way constitute an obstacle for keeping good relations with Russia. He expressed his confidence that the technical part of RTA preparation may be accomplished by the end of 2009.

Oleksandr Chalyi, Deputy Head of the Secretariat of the President of Ukraine, said all Ukrainian people approve any measures in terms of EU integration. But at the same time he mentioned that "free trading with country, not having any membership chances or having the candidate chances, constitutes two different negotiation variants". Taking that into consideration, as well as problems with further EU extension, "Ukrainian business shares a quite moderate attitude towards it".

According to his opinion, the FTA building needs from 5 to 10 years instead of 1-2 years. Besides that, the Russian position should be taken into account at the negotiations. "Earlier my idea was that Russia would not interfere into our talks with the EU. We enjoy a good free trade agreement with Russia, quite beneficial for our business since it does not have to fit such strict terms that WTO is dictating. But at the moment Russia is extremely concerned as for our negotiations". Deputy Head of the President's Secretariat expressed his opinion about the necessity to hold trilateral negotiations involving EU, Ukraine and Russia.

Moreover, Oleksandr Chalyi thinks Ukraine needs 5 years to provide the national certification system. "Should the cheep European milk come to Ukraine, it will not be so easy for us to deliver Ukrainian milk to the European Union", he said.

According to the opinion of Hrygoriy Nemyria, Vice Prime Minister on European and International Integration, Ukraine has to approach the issue of FTA building in a realistic way instead of more or less optimistic, utilizing the experience of the countries having come through such procedures. "Considering the fact that these processes are generally lasting for 2-3 years, the optimal and realistic term for us will be the "2 years plus" period; we should set exactly these time frames in our case".

Igor Burakovsky, Director of the Institute for Economic Research and Policy Consulting, thinks the Free Trade Area has to be discussed as a business project and not as a political one. "Today there are no distinct recommendations or expectations concerning FTA. Ukrainian business community shares two ways of approaching the issue. We have addressed the largest Ukrainian exporters: they say they are targeted at relations with Russia and hope to have the Free Trade Area with Europe. In addition, we asked whether they considered the FTA as an instrument to enter the European market. And their reply was that they either were already in there or were having certain contacts".

Jean-Pierre Saltiel, Member of the Board of YES, says entering the FTA will be quite an expensive campaign from a financial point of view since, within the conditions of such Area building, Ukraine has to bring a range of economy branches up to EU level. At the same time he sees the FTA building as a very important step in EU integration process. "We have never considered FTA to replace the EU membership, but it may be an important landmark on the way of becoming the member of the European Union".

Condoleezza Rice
66th Secretary of State of the United States, 9th YES Annual Meeting, 2012
«Democratic transformations require time, require patience, and require support - from outside as well as from inside, from people»