The 10th Yalta Annual Meeting entitled “Changing Ukraine in a Changing World: Factors of Success”, organized by the Yalta European Strategy (YES) in partnership with the Victor Pinchuk Foundation, took place at the historic Livadia Palace in Yalta, Ukraine, from 19th to 22nd September, 2013. More than 250 leaders from politics, business, society and media representing 20 countries discussed global challenges and their impact on Ukraine, Wider Europe and the world.

President of Ukraine Viktor Yanukovych and President of the Republic of Lithuania Dalia Grybauskaitė officially opened the 10th Yalta Annual Meeting on September 20th. They presented their visions on how to create synergies for Wider Europe. Chrystia Freeland, Fellow, Martin Prosperity Institute at the University of Toronto and former Editor of Consumer News, Thomson Reuters (2013), moderated.

The 10th Yalta Annual Meeting focused on factors of success that create strong, competitive, sustainable and fair countries and societies. Among the topics were the global economy, energy security, threats and innovations transforming our lives, as well as successful leadership approaches. Special attention was paid to the future of Wider Europe and Ukraine’s cooperation and integration perspectives.

In addition to President Yanukovych, Ukraine was represented by Prime MinisterMykola Azarov, Yuriy Boyko, Vice Prime Minister; and Leonid Kozhara, Minister for Foreign Affairs, among others.

Engaging Ukrainian youth in the global debate within the Yalta Annual Meetings is another area of focus of the Victor Pinchuk Foundation. This year, for the fifth time, the Foundation organized the participation of 30 Zavtra.UA andWorldWideStudies scholarship holders, selected through an open competition from more than 1,500 candidates from all over Ukraine. They met with key speakers and participants and develop suggestions for the future of Ukraine and Wider Europe.

Special Partners of the 10th Yalta Annual Meeting include:

Partners of the 10th Yalta Annual Meeting are:

State Agency for Investment and National projects of Ukraine

Yalta European Strategy (YES) is the largest social institution of public diplomacy in Eastern Europe, providing an open and equal dialogue on global issues affecting the European Union, Ukraine, Russia and other countries. This non-partisan organisation was established in 2004 by the Ukrainian businessman and public figure Victor Pinchuk.

The YES Annual Meetings held in Yalta’s Livadia Palace have become an open platform to discuss and look for new ideas and views on paths to European, Ukrainian and global development. Every year these meetings bring together over 200 politicians, diplomats, statesmen, journalists, analysts and business leaders from more than 20 countries.  The dialogue on global challenges broadens the vision on the situation inside Ukraine and the prospects for the country’s development in the modern world. It is also an incentive to find common ground between countries, common interests and values.

Victor Pinchuk Foundation is an international, private and non-partisan philanthropic foundation based in Ukraine. It was established in 2006 by businessman and public figure Victor Pinchuk. Its goal is to empower future generations to become the change-makers of tomorrow. To achieve this, projects are developed and partnerships are built in Ukraine and worldwide.

in people, to boost human capital;
in society, to promote social responsibility;
in the world, to foster a more integrated world.

The projects of the Victor Pinchuk Foundation include, among others: the network of neonatal centers Cradles of Hope, the largest private scholarship programme in Ukraine, Zavtra.UA, the WorldWideStudies scholarship programme for Ukrainian students studying abroad, the centre for contemporary art PinchukArtCentre with its biannual prizes Future Generation Art Prize and PinchukArtCentre Prize. The foundation also hosts the Davos Philanthropic Roundtable and Davos Ukrainian Lunch organized each year at the occasion of the Annual Meeting of the World Economic Forum and supports the international network YES (Yalta European Strategy) to foster Ukraine’s European and global integration, as well as a startup online platform for fostering philanthropy in Ukraine, the Philanthropic Marketplace. The Foundation is a member of the European Foundation Centre and the Ukrainian Grantmakers Forum. It cooperates with the Clinton Global Initiative, the Brookings Institution, the Peterson Institute for International Economics, the Peres Center for Peace, the Tony Blair Faith Foundation, and other nongovernmental organizations.

All news
Khadija Niazi, 13 years old student from Pakistan, wrote in her blog about her impressions as the participant of the 10th Yalta Annual Meeting.
Ukraine has never been so close to the EU as it is now – Alexander Kwaśniewski
Signing the EU-Ukraine Association Agreement is only the beginning of the journey - Arseniy Yatsenyuk 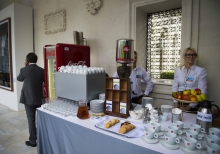 Yalta Annual Metting lobby with a cup of coffee 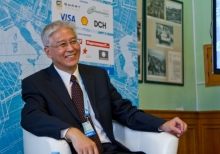 Young participants of the 10th Annual Meeting of YES

David Rubenstein
Co-Founder and Co-Executive Chairman, The Carlyle Group, 16th YES Annual Meeting, 2019
«If you do things that can make the country a better place, you’re more likely to achieve personal happiness than through anything else you’re likely to do in the short term.»