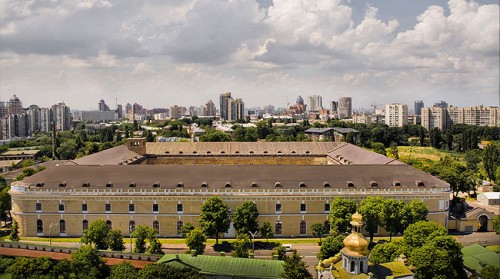 Mystetskyi Arsenal National Art and Culture Museum Complex is the largest and the most ambitious art institution in Ukraine.

Mystetskyi Arsenal's mission is to envision a unified concept encompassing the breadth of Ukrainian cultural achievement and initiative, and to promote that concept embodied in Ukrainian art, culture, and history, ensuring its place in the broader heritage of world culture.

Mystetskyi Arsenal was constructed between 1783 and 1801, the Arsenal is a Ukrainian National Historic Monument with more than 60,000 m2 of interior space, designed originally for the purpose befitting its name. The Arsenal displaced the Pechersk Ascension Orthodox Convent, and throughout the first two centuries of its existence has fulfilled a military function, first as a garrison and then as an armaments plant.

In 2003, the Mystetskyi Arsenal was rechristened as a cultural institution called “The Mystetskyi – or Arts – Arsenal”. By October 2010 the Old Arsenal had been sufficiently adapted to host events, and most significantly, visitors. The architectural and spatial configuration of the Arsenal complex allows it to hold large-scale art projects, exhibitions, concerts, performances, presentations, charity balls, and more.

Indeed, the Mystetskyi Arsenal, has done all this and more.  In these five years over 2,5 million visitors have crossed Arsenal thresholds for 50 major, and scores of small-scale projects.  Annual events at the Arsenal of an international character and impact include Art Kyiv Contemporary, the Book Arsenal, the Grand Antique Salon, and Grand Sculpture Salon.

With a thematic range covering prehistoric stone carvings to a millennium of sacred art, from Shakespearean tragedy to the Ukrainian avant-garde, and with a particular emphasis on the latest in artistic experimentation, large-scale events at Mystetskyi Arsenal celebrate world and Ukrainian culture from their pre-historic roots to their most contemporary flower.  A home to the visual arts, music, performance, cinema, and more, the Arsenal has served as sometime home for the genius of eminent international and home-grown artists.

Our most ambitious project to date is certainly our inaugural Biennale of Contemporary Art –ARSENALE 2012.  With the support of the Ukrainian Ministry of Culture, the Biennale attracted the work and participation of 100 internationally celebrated artists from 30 countries.

An innovator in the arts, the Arsenal has developed an Arts Educational Program – the Arsenal of Ideas – just for children.  The Mystetskyi Arsenal Charitable Foundation regularly addresses social, children’s, and special educational needs through dedicated programming.  Our Arsenal Small Gallery exhibits the work of emerging Ukrainian artists and hosts chamber projects by leading Ukrainian artists.

In 2014, Mystetskyi Arsenal created a big and dynamic charitable platform Arsenal of Good Deeds, which functions in terms of each project of Mystetskyi Arsenal and on the basis of which separately-operating large-scale charity projects are created. The main activities of the initiative are: support for wounded militaries, humanitarian aid for the area of ATO and IDPs.

Art and culture, free to explore, are at the heart of any progressive society.  Whether  through innovation in children’s education, special needs projects, celebrations of classical masterpieces, or the advancement of great literature, the Mystetskyi Arsenal is at the vanguard, leading Ukraine beyond its recent, difficult past and into Europe and the world. This is our moment. No longer hidden in the shadows, the life and art of this dynamic place are open to all.